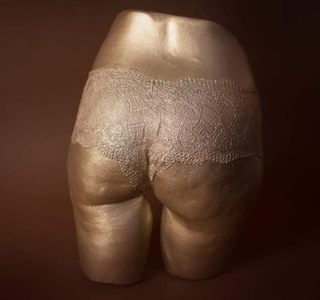 We are constantly bombarded with images of the perfect body everywhere we look…. TV, shop windows and especially on social media.
Women often have many hang ups about their body… too wobbly, too skinny, too curvy, not curvy enough….. In my opinion, however, there is no such thing as a “perfect” body. I was a nurse before I was a life caster so I have seen a few!

Tina from Southampton decided to embrace her body after having three children and then going back to university.
Tina had worked hard to get her body back in shape. She was feeling healthy and starting to feel more confident. She thought…what better way to capture that feeling than by getting a cast of my bottom.
“I decided to have my bottom cast as I finally felt confident within myself after having my third baby. I was loving my body again! I’m in love with the cast and it’s a great reminder to always love myself whatever, which is something not enough women do”
Tina admitted she felt a bit nervous in the car on the way but she took a deep breath and knocked on the door.
“Laura was so friendly and talked me through the whole process before starting. I did not feel uneasy or embarrassed she told me what she was doing at every stage”
When Tina picked up the cast to take it home she popped it in the back of the car with her kids. They all thought it was really funny that mummy’s bottom cast was next to them in the car!
Tina’s husband on the other hand was over the moon with the cast and it now has pride of place in their downstairs toilet! And has become quite a talking point when they have guests!

Body casting has become more popular over the last few years, as celebrities join in with the trend.
Amanda Holden has had her bottom cast and Myleene Klass and Coleen Rooney had belly casts when they were pregnant.

So why not turn your body into a piece of art?

The Southern Daily Echo wrote an article about cast on 8/6/2019.
Read the article here The Full article