We use cookies, simply to track visitor numbers to this website. We never store any personal details. If you continue to use this website, you agree to their use. Accept Cookies Decline Cookies More
Covid Update (2021)- 12th April- I have re- opened my studio!! 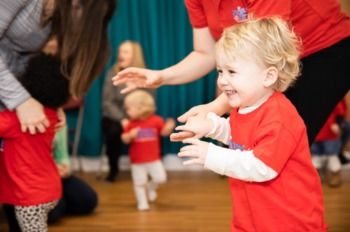 Young children don’t need anything fancy to play a great game using their imagination…for example a cushion can be turned into a rock and the sofa into a mountain!
Things we do everyday and have in our house can probably be turned into an adventure. Some of the best groups I went to with my kids were ones which involved using their imagination.
I’ve known Kirsty from Pyjama Drama for a few years now and would highly recommend her classes.
Although my kids are too old for her classes, both my younger nephews have loved them. Pyjama Drama is a definite 10/10 from them.

“Mummy, play with me!” As your little one drags the dressing up box across the floor, you put down your cup of tea (will you ever get to drink one before it goes cold?) and await your instructions. “Mummy you can be the fairy and I’ll be the dragon, put the sparkly fairy wings on Mummy I’m going to chase you…Now hide in the cave Mummy, quick!!!” As you try to squeeze yourself into the age 2 - 3 fairy wings and set off flying around the living room you may long for a moments peace – but you do it for that smile, that giggle, that knowing feeling that one day they won’t ask you to play anymore.
Pretend play is a fantastic way to engage with your child, but here’s a question for you….Do you need all the ‘stuff’? Without the fairy wings, without the dragon costume or the ‘cave’ which took you half an hour to create out of bed sheets, your child would still giggle in excitement and shriek with delight as the fairy cast a spell on the naughty dragon. When they are engaged in play, their imaginations are ignited, and this is where the real magic happens….

In a Pyjama Drama session, the children engage in pretend play together and head off on an exciting new adventure each week. Let me set the scene for you. This week in class the plan was to go on a picnic in the forest, where we would find a lost frog in a muddy puddle and return him safely to his family pond. No plastic picnic food, no blue cloth to signify the pond, no cuddly frogs…. We just add IMAGINATION!

There truly is an amazing feeling in the room as the children sit down to their imaginary picnic, passing each other sandwiches and sharing cakes…then a gasp and total silence as we hear the noise of the frog. We tiptoe through the forest searching for him, squeezing through the bushes and helping each other balance along wobbly logs. Then a sudden burst of screams and giggles as the cheeky frog jumps up and slashes us all in mud! Parents can hardly believe it as the children wipe off the imaginary mud before gently picking up their frogs and carrying them to safety.
Sharing, teamwork, storytelling, empathy, confidence, movement - All vital skills and all developed without the need for any fancy equipment.
At Pyjama Drama we aim for the children to take the lead whenever possible. We work from a detailed session plan, but we never quite know where the children’s imaginations will take us! This week a child suddenly decided he was now stuck in the muddle puddle. So, we came up with a plan to get our tractors and dig him out. A little girl then said her frog had a sore leg, so off we went to the shop to buy some plasters. At Pyjama Drama every child’s idea is welcomed, there are no right or wrong suggestions and class sizes are small so each child can contribute and feel part of the team!
Our classes range from 6 months – 7 years with 4 groups to suit the different age groups

I know what you’re thinking, Drama…for babies? People often ask how we ‘do drama’ with babies. Well, put quite simply it’s about play! playing games help babies and young children learn about their world and to develop their cognitive, physical and emotional skills. Children don't need complicated equipment or expensive toys, a child's favourite toy – is YOU! There is nothing that delights a young child more than seeing the face of someone they love engaged in play with them!
So, whether your child is 6 months or 6 years old – there is a Pyjama Drama adventure just waiting for them to dive into. 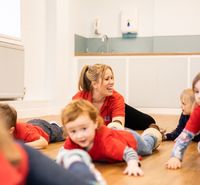